Yesterday I spoke at Open Source in Mobile USA 2009 (OSiM) . The theme of my talk was really that that web’s the platform of choice in mobile, and that it distills the riotous assembly of choices for mobile development (J2ME, Java SE. BREW, Objective C, to name a few) to web development in HTML, CSS, and JavaScript. Device APIs are thus really web APIs exposed to JavaScript; Geolocation is currently the prime use case. I also discussed our unique Mozilla modus operandi, which is often an exercise in structured, beautifully productive chaos.

Of course, mobile Firefox (Fennec) isn’t available on many devices, and we’ve got a lot of work left to realize the vision of the web being the platform of choice on mobile. How will that manifest itself? I got plenty of questions about WebKit vs. Firefox, and ease of use of each codebase for mobile projects. Mozilla’s platform (including XUL, extensions, and XPCOM) stands as a sometimes weighty alternative to WebKit, but people love the platform with its extensibility, and that’s where the promise lies. This theme will make a brief reappearance (amongst other themes) in my panel on March 16 at SxSW 2009, in which I’m sticking a Chrome guy, a Microsoft guy, an Opera guy, and a Mozilla guy together for a panel discussion on where the web is going. 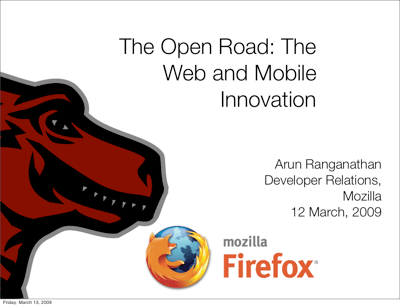