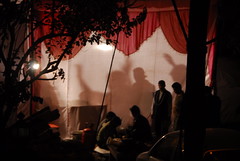 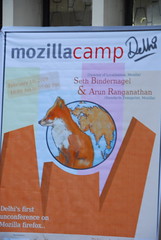 MozCampDelhi’s afternoon session started out with a Skype presentation by Pascal Finette, discussing the Mozilla Labs Concept Series.  The important thing here is that contributions for directions the ‘fox can go aren’t restricted to those who can code; anyone can submit a prototype or an image or a video clip of themselves explaining something with interpretive dance (I exaggerate, but why not?).  Pascal’s talk stimulated discussion in the crowd about Creative Commons, and other lab projects such as Ubiquity and Weave.  Folks wanted to know whether localization initiatives were also part of the purview.

Seth then discussed localization initiatives. Against the backdrop of the BBC publicity about Firefox in Hindi [BBC] (amongst other languages like Gujarati, Marathi, Bengali, etc.), I was personally interested in the number of users of a localized browser at MozCampDelhi. Very few hands went up when I asked who used Firefox in a localized version, but this could be a function of the audience.  Seth got a great question about string transliteration across Indic languages, rather than always reinventing the wheel on a given Indic localization. This was something we took up with other folks in Pune.

As a bit of an intermission between talks, Mohak showed us a video telling the “story of Firefox.”  This just really cracked me up.  It had Dave Hyatt and Blake Ross as post-Netscape visionaries in a sort of animated version of the browser wars.  When I see stuff like that, I’m always reminded of the fact that my day job impacts people. Lots of people.

My talk was about the Open Web — I’ll have my actual slides on SlideShare soon.  All of my demos can be found on the Mozilla Library wiki, but in particular, I reused a lot of eye candy from Vlad’s talk on Web Graphics and Multimedia.  I showed the audience demos of SVG, Canvas, CSS, and the HTML5 video element (on a trunk build).  I also showed them the Bespin IDE running on localhost (later, at IIT Kanpur, I’d have students hack on code using Bespin — stay tuned for that update).  The questions from the audience were provocative.  Somebody asked us, somewhat pugnaciously,  if “Opera was simply a better browser.” *sigh There’s one in every crowd.  My opinion is self-explanatory, but I did point out to mobile enthusiasts that unlike Opera, we weren’t making a J2ME midlet for lower-end devices (and we weren’t providing a web proxy).  Instead, Fennec goes after smarter phones, and is still a work in progress. In general, the keenly expressed desire to look for alternatives to IE and Windows is really awesome to behold. It was a welcome question, and I got it again repeatedly at IITK and Pune as well. Firefox memory leaks were also pointed out in no uncertain terms, and this clearly is something I’m going to take back and look at closer.

Others were really curious about open codecs on the web, and wanted to know if existing formats (like Flash), by virtue of their widespread availability, would stymie the advance of Ogg Theora and Ogg Vorbis as open alternatives to the incumbents.  I pointed out that it was about the Open Web — that is, the intersection of fonts, graphics (SVG and Canvas), style (CSS), and video which is where the promise lay. That is, video as as first rate citizen of the web, not as something punted over a walled, rectangular garden (aka a proprietary third-party plugin) within a web page.

After it was over, Kinshuk Sunil got Seth and I to talk about stuff on candid camera. We’re both totally beat after we call the event a wrap, but my gastronomical enthusiasm convinces Seth to come with me and some family to Old Delhi for kababs (“Secret of Good Mood, Taste of Karim’s Food”). We haven’t really built much acclimatization time into this schedule.

Oh, and then the drums. They stop slightly past the witching hour, marking the end of Day 1. We’re off to Agra tomorrow, catching a 6a.m. train. So it begins.